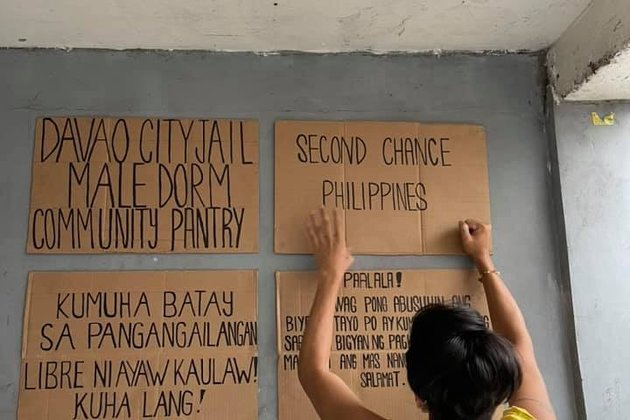 DAVAO CITY (PIA) - A community pantry, similar to the ones being established in places around Metro Manila, has been put up inside the Davao City Jail Male Dorm with PDLs (Persons Deprived of Liberty) sharing some goods to help fellow PDLs inside the jail.

Captain Edo Lobenia, spokesperson of the Bureau of Jail Management and Penology-XI (BJMP-XI) recounted in his social media account

"Habang nagsiset up na kmi ng community pantry sa loob ng Davao City Jail ang daming mga Persons Deprived of Liberty ang nag-usisa at nagtanong kung anong meron. Nuong nalaman nila kung ano siniset up namin may mga ilang mga PDL ang nag-abot ng mga biscuit at kape nila (While we were setting up the community pantry inside the Davao City Jail. There were many Persons Deprived of Liberty looking and asking what is all about. When they learned what we were setting up, some PDLs shared their biscuits and coffee)," Lobenia said.

The spokesperson said it was heartening that there were still PDLs who would want to help their fellow PDLs.

"Biglang hinipo ang puso ko at nagkunwari na kakain muna ako ng agahan. Ang totoo nito ako ay umalis dahil hindi ko mapigalan ang tulo ng mga luha ko (It quickly touched my heart and I excused myself telling them I would eat my breakfast, but the truth is, I left because I cannot stop the tears falling from my eyes)," Lobenia said in his social media account.

He said the inspiration came from the community pantry established by businesswomen Ana Patricia Non in Maginhawa Street, Quezon City which has been replicated in different parts of the country.

The initiative inside the Davao City Jail called the Kakusa Community Pantry was realized by donations from Lobenia and his fellow organizer's friends, family along with the private sector and the UP College of Law Charivari. The group began setting up the community pantry on April 18. Lobenia said City Jail warden Nimrod Valenia has been supportive of the endeavor.

With life difficult inside the jail because of the pandemic, Lobenia is inviting the public to pitch in and help the poor and lonely PDLs

For those wanting to donate to the Kakusa Community Pantry, they can directly message Captain Edo Lobenia (Facebook account Do Lobenia) or the Facebook page Second Chance Philippines. (PIA/RG Alama)