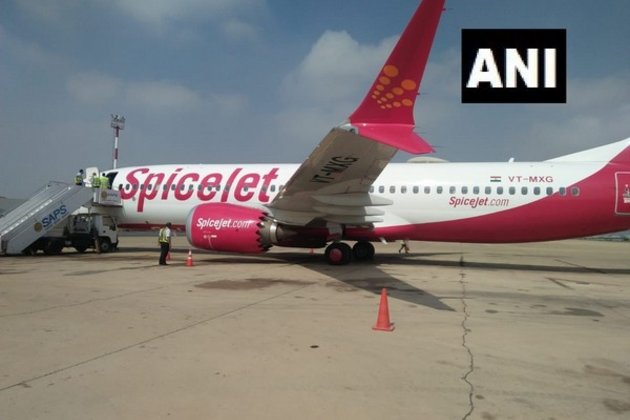 New Delhi [India], July 5 (ANI): The Directorate General of Civil Aviation (DGCA) on Tuesday ordered a probe into the incident where SpiceJet's Delhi-Dubai flight was diverted to Karachi as the fuel indicator started malfunctioning.

More than 150 passengers are onboard the SpiceJet flight (Delhi-Dubai) that made an emergency landing in Karachi, Pakistan after developing a technical fault.

India's low-cost carrier SpiceJet said the flight was diverted when it was on the way to Dubai and flying on 5000 ft.

The conversation between the SpiceJet pilot and ATC Karachi which has been accessed by ANI, shows that the pilot has asked for a precautionary landing after suspected fuel leakage in the aircraft.

"The SpiceJet pilot is heard telling ATC Karachi that the fuel leakage in the aircraft, requesting it for precautionary landing," ATC conversation read access by ANI.

"On July 5, 2022, SpiceJet B737 aircraft operating flight SG-11 (Delhi - Dubai) was diverted to Karachi due to an indicator light malfunctioning. The aircraft landed safely at Karachi and passengers were safely disembarked," the spokesperson of the airline said.

According to SpiceJet, no emergency was declared and the aircraft made a normal landing at Karachi airport.

Earlier on Saturday, a domestic flight made an emergency landing after its cabin filled with smoke soon after take-off for the central city of Jabalpur, the airline said.

A senior DGCA official said that they are investigating all six incidents on SpiceJet aircraft reported in the last 17 days.

"We are concerned over passengers' safety and a team has been formed to investigate all the incidents thoroughly and submit the report at the earliest," he said.

In the monthly report of DGCA, SpiceJet came in second in terms of flight cancellations in the month of May.

On June 19, two incidents were reported in two separate flights of SpiceJet. First, a Delhi-bound flight carrying over 185 passengers caught fire soon after take-off from Patna airport and had to make an emergency landing. The airline said a bird hit that had damaged their fan blades.

In another incident on the same day, the SpiceJet Bombardier Q400 Dash 8 plane from Delhi to Jabalpur made an emergency landing in Delhi as the cabin pressure couldn't be built up as the plane gained altitude. (ANI)