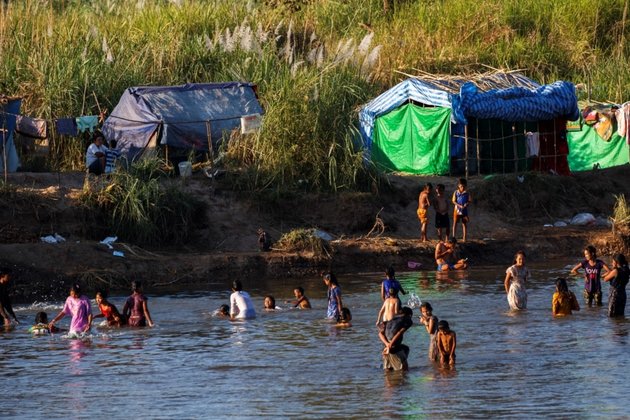 The United States is in talks with the Thai government, a close ally, about allowing Myanmar refugees stuck in Thailand to leave for the U.S.

In an interview Thursday with VOA, State Department Counselor Derek Chollet said, 'Thailand for many years has been a very close partner of ours on refugee issues. It's something we are constantly talking with them about. During my visits to Thailand over the last year, it's been top of mind.'

During his trip to Thailand and the border region last year, he added, 'It's a constant conversation we're having ... and I can say they're very close and critical partners in this.'

According to several non-governmental organizations involved in the case, nearly 500 refugees are approved and waiting to resettle in the U.S., but are stuck in Mae Sot, a town in the Thai-Myanmar border area. The Thai government has not issued exit permits, which would allow them to leave Thailand, for more than a year. Another 600 refugees in other areas have been approved for resettlement to third countries, but also haven't been allowed to leave Thailand. 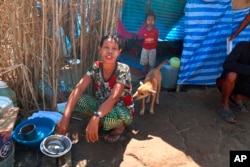 FILE - Displaced people from Myanmar live under a makeshift tent along the Thai side of the Moei River in Mae Sot, Thailand, Feb. 7, 2022.

'Thailand has needlessly obstructed the departure of so many Burmese-Myanmar refugees for far too long,' Phil Robertson, deputy director of Human Rights Watch's Asia Division, said in an email to VOA. He added, 'It's time for this blockade to end.'

In addition, he asked for more pressure on the Thai government. 'The U.S. government should redouble pressure on Bangkok to start issuing exit permits for recognized refugees from Myanmar because Thailand is not keen to do so and will continue to play for time if permitted to do so.'

The Thai foreign ministry has not responded to queries filed by VOA by email about the delays in issuing permits.

According to the NGOs assisting the refugees, more than 20,000 people have fled to Thailand amid fear of political persecution since a coup in Myanmar in February 2021 led to the ouster of the democratically elected government. About half of them, 11,000, have contacted the UNHCR.

Initially, Myanmar refugees who fled to Thailand were allowed to leave Thai airports to settle in third countries that had accepted them for resettlement; but after a few months, the Thai government stopped such departures.

'This whole problem started soon after the Myanmar military started raising objections with the Thai army, which since then has shamefully bent over backward to do the bidding of the murderous Myanmar junta,' said Robertson.

He added, 'The truth of the matter is these refugees need protection, and Thailand should recognize the urgent humanitarian impetus and let them proceed to the U.S. and other third countries willing to resettle them.'

FILE - This photo taken Dec. 16, 2021 by Metta Charity shows people from Myanmar waiting to be processed in Thailand's Mae Sot district near the border, as Thai military personnel look on.

The U.S. has welcomed hundreds of Myanmar refugees since the military coup in 2021. After the coup, large protests broke out across the country. The military cracked down on pro-democracy protesters by raiding homes and making thousands of arrests. Thousands of people fled to neighboring countries to escape the violence.

Meanwhile, for the Myanmar refugees who have been stuck in Thailand, may finally have some hope of a resolution after a trip by U.S. Assistant Secretary Julieta Valls Noyes to Thailand in December.

According to the State Department, Noyes made trips to Thailand and Bangladesh in early December to discuss refugee protection and humanitarian assistance in those countries.

During her visit to Thailand and subsequent discussions on Myanmar refugees with senior Thai officials, she pressed the issue of the departure process, according to a diplomatic source in Thailand.

The Thai foreign ministry also issued a statement on the bilateral meeting with Noyes which said, 'The Thai side reaffirmed its readiness to assist and cooperate with the United States in accordance with Thailand's national policies and laws, international humanitarian principles, and humanitarian tradition.'

As of this report, there has been no change for those Myanmar refugees waiting in limbo in Thailand. According to the refugees themselves, despite receiving assistance from various NGOs, their living conditions feel like prisons as they continue to wait for a departure date and an end to the uncertainty surrounding their future.